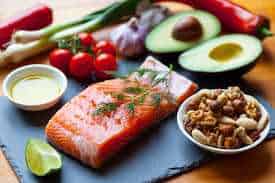 Vegetarian Mediterranean recipes differ in different countries and cities, each country has a distinct flavor in its food, customs, and food traditions because cooking is a kind of arts and sciences, so the feeling of food when you taste it is in itself a taste for and enjoyment of life.

Read more about the most protein-rich vegetarian food

Despite the great diversity in vegetarian Mediterranean recipes, the countries of the Mediterranean basin share a culture or art of food, unlike other cultural features. The characteristics of this cuisine have their own features and foods that are known to be healthy and beneficial to humans.

Because of the nature of the Mediterranean civilizations’ interconnection with each other, the process of preparing food between them has been greatly affected, and they have similar methods of cooking. This cuisine is characterized by its great variety, there is an abundance of vegetarian Mediterranean recipes, its flexibility in preparation, and the wide variety of ingredients that come from different regions.

Recent studies have proven the many benefits of Mediterranean food for human health, as it protects it from many diseases – because its elements are healthy in the first place from its reliance on vegetables, fruits, and olive oil – such as heart disease, forgetfulness, or stroke, and it also maintains rates of Natural sugar and thus prevention of diabetes. And other benefits that prevent human infection with various diseases and disorders.

Features of the diet in general in these regions include high amounts of olive oil, legumes, grains, fruits, and vegetables with moderate amounts of dairy products and fish. The eastern Mediterranean is a region rich in many foods rich in ingredients and unique foods.

Mediterranean cuisine and its benefits for human health:

When eating Mediterranean food, this means eating fresh vegetables, delicious grains, fish, or beans and olive oil, and a number of various herbs with the addition of spices, nuts, etc.

These are the main elements of the traditional diet, which relies heavily on plants for the peoples of the countries bordering the Mediterranean… It is primarily a healthy food because it protects against heart disease, and from many chronic diseases such as diabetes, as monounsaturated fats in Olive oil and fish have anti-inflammatory effects, which may help prevent heart disease and many other diseases.

Also, continuing to follow the Mediterranean diet – according to what studies have indicated – leads to a significant reduction in weight compared to a low-fat diet. It also reduces levels of low-density lipoprotein (LDL) cholesterol.

Research has also found that dependence on vegetarian Mediterranean recipes

The fiber, which is present in the nutrients of this diet, creates a feeling of fullness, a feeling that reduces appetite and thus does not gain weight.

Vegetarian Nachos: 2 recipes for making the most delicious snack