We often look for delicious and delicious food that takes us in a world of distinct taste, but to have a long journey between distinctive international foods, this is a treasure, because wandering around international kitchens and tasting their most delicious foods and dishes is a beautiful and fun habit.

They say that the taste of food has an artistic sense that many people do not have, and therefore each country offers a special dish that resembles it, so that it has a different taste among its tourists, leaving a special character and a distinctive taste, as food is one of the best things that can introduce us to the culture of any country.

This article takes us on a tour around international food from different kitchens of the world so that we can taste together with a journey of fun and art in serving dishes.

Italy is famous for its “pasta”, which is pasta and offers on it many sauces, spices, and various ingredients, and the most famous of them is the “Angel Hair Pasta with Amatricana Sauce”, and this dish consists of meat, zucchini, and beans.

And the “Buffalina pizza”, which consists of thin dough and toasted from the sides and topped with peppers, figs, lemons, mushrooms, leafy greens, and buffalo mozzarella cheese, with San Marzano tomato sauce.

The English cuisine is characterized by the “Fish and Chips” dish, meaning cod and fried potatoes, which is one of the most famous English meals, where the fish is fried until it gets a golden color and usually fried or mashed peas are added to the dish, and sometimes you may find a plate of rings Roasted onions as a side dish but you have to order it yourself.

As for Spain, it is characterized by the Spanish omelet Tortilla Espanola, this dish is one of the most famous and loved dishes in Spain, and its main ingredients are: (eggs, potatoes, and onions cooked in olive oil), and this dish has many forms where there are thick and thin Although it is said that this dish is easy to prepare, it is one of the dishes that require special cooking technology. 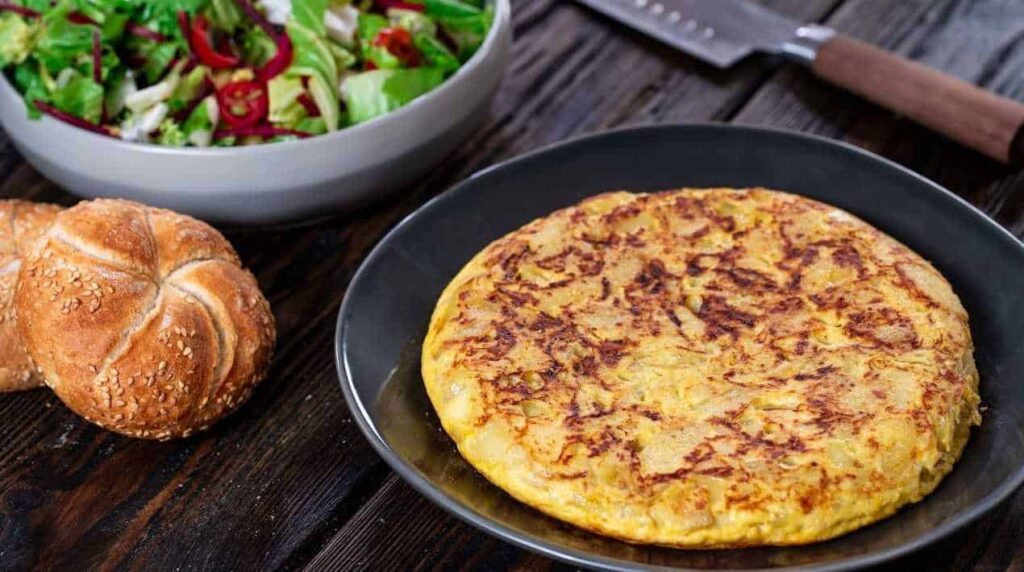 Spanish cuisine does not finish with its delicious recipes, with the black rice dish Arroz Negro

One of the most famous dishes in Spain is rice dishes of many different types, including green rice with oysters, rice with beans and turnips, and rice with salty cod.

As for our dish today, black rice consists of: (white rice, squid, seafood broth, olive oil, sweet pepper, onions, and squid ink “the ingredient that turns the color of the rice into the black”).

If we talk about international cuisine, we must mention France, which is usually characterized by pastries and the most famous of which is croissants, 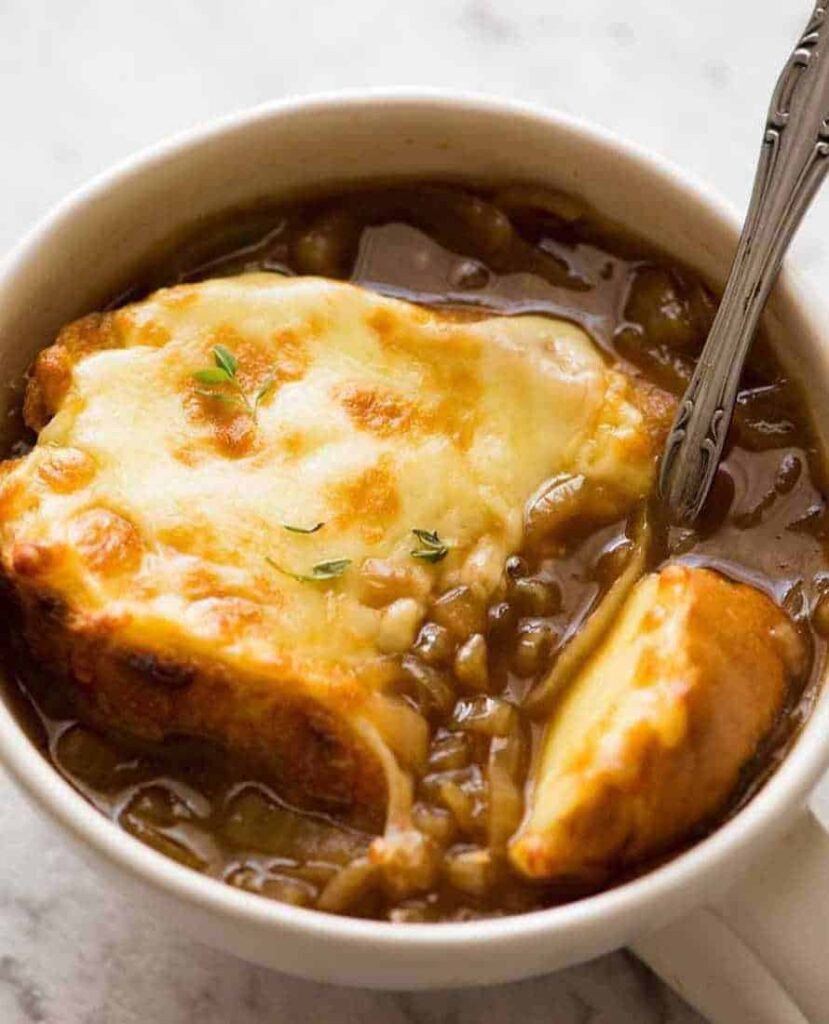 but today’s dish is French onion soup, where this traditional soup is made from onions and meat broth, and is usually served with toast and melted cheese on its top. The origin of this soup goes back to the Romans and was considered a dish of the poor. The wonderful taste in this soup comes from smashed and caramelized onions, which are cooked slowly, usually, meat broth or water is added, and milk, eggs, or flour are added to make the soup thick.

German food is famous for being rich, creamy, and delicious, and each region has its own special dishes and traditional foods, and the list of the best German foods can easily change from one city to another. Therefore, we have chosen several dishes from German cuisine, and they are:

Spätzle is a dish of German egg noodles similar to pasta. This dish is popular in southern Germany and is considered a special dish in the Swabian region and the state of Baden-Württemberg. No one knows the exact origin of this dish, and there are a number of different versions of this dish in neighboring countries. This type of noodle is made from wheat flour and eggs and is often served with some cheese and sometimes grilled onions are added. Sometimes a hot dip is served directly from the pan, and according to Swabian tradition, an egg is used in the dough for more than the number of guests. In some areas, the dough is mixed with a number of other ingredients such as cherry, apple, liver, or saukraut, which is fermented cabbage. 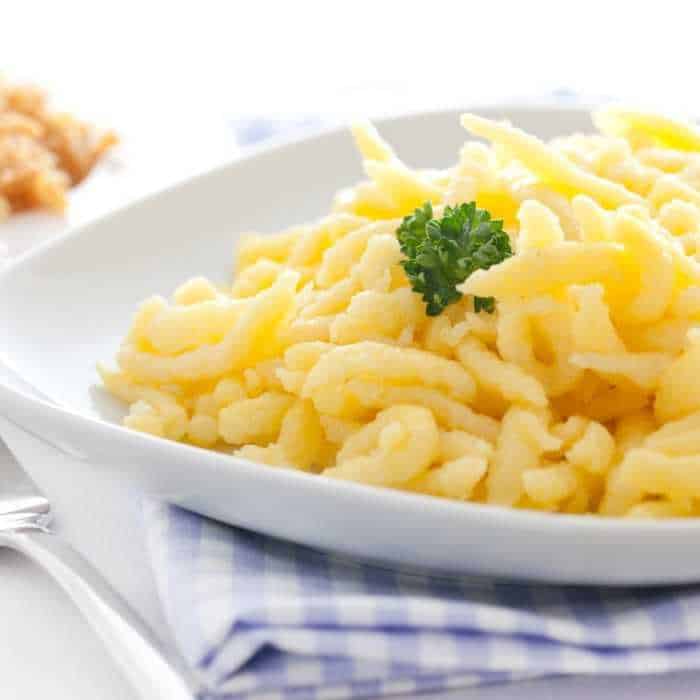 Potatoes are a German favorite, which is why the Germans created the Kartoffelpuffer potato pancake, which is the main ingredient in many side dishes. It is a small fried pancake made of grated potatoes mixed with flour, eggs, onions, and spices. Sometimes it is served as a side dish with meat or fish, and other times it is served as a dessert with apple sauce, blueberries, sugar, and cinnamon.

And we cannot forget the sausage Wurst, which is one of the most popular food in Germany, as there are more than 1500 different types of sausage made in Germany, and there are many stalls on the street that sell it. Among the most popular types are fried Bratwurst sausage made from ground meat and spices, a Viennese sausage that is smoked and boiled, and there are some local varieties such as Currywurst in Berlin, which is served with ketchup, Weisswurst sausage in Bavaria, which is a white sausage that is peeled before eating it with sweet mustard. Also, Nürnberg’s Rostbratwurst, which is served with fermented chopped cabbage.

Previous lemon..12 amazing benefits of lemon you didn’t know
Next 10 most expensive foods in the world … Unbelievable prices